How to Run a Race

How to Run a Race

Want to run a race? You’re not alone.

Last October, I made a deal with my best friend, “I’ll run a 5K, if you lead that group.” We’d been chatting about things on our girls’ weekend in North Carolina when those words tumbled out of my mouth. I’d been listening to her talk about this group, her vision and how she’d been procrastinating getting started. In my mind, there was no good reason for her to stall any longer so I threw down a challenge that would make her sit up. You see, I’m not a runner. Unless you count gym class in Junior High. 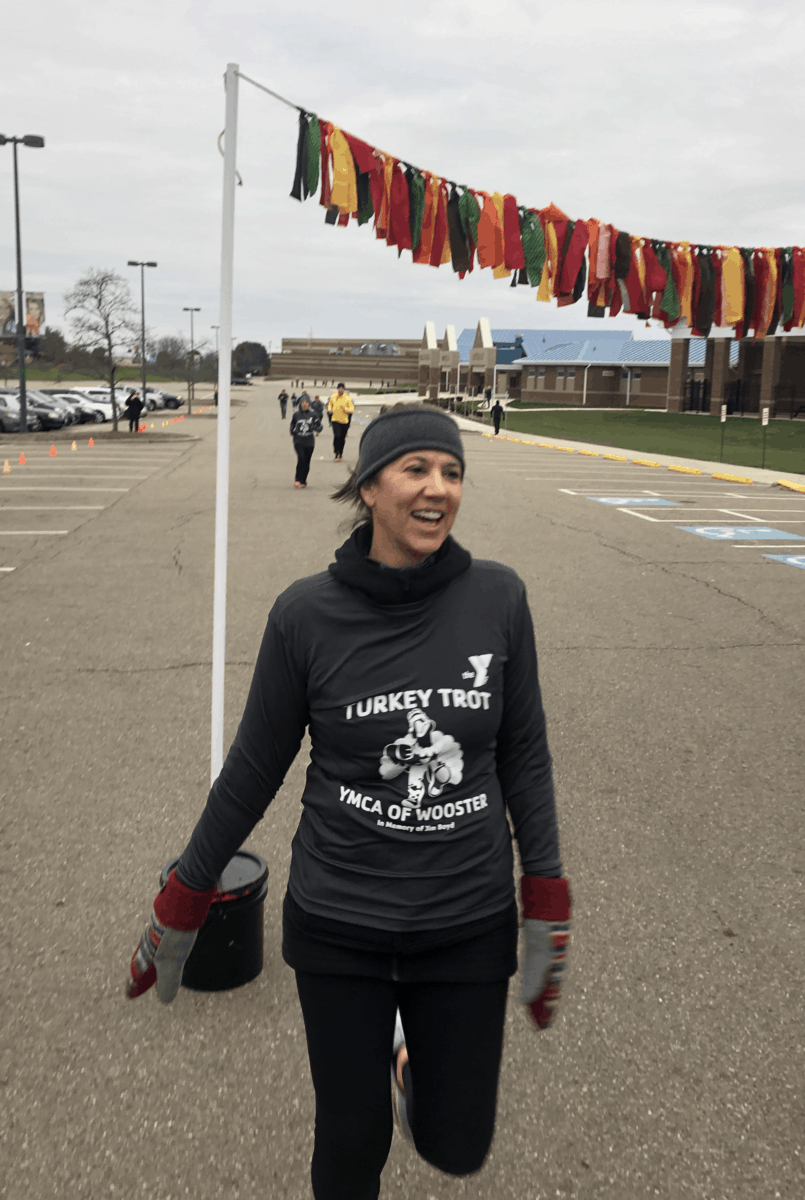 Proof I did it. Did I mention it was 23 degrees that day?

A Race: Show Up & Get Moving

Six weeks later, I ran in the YMCA’s 5K Turkey Trot, a small race on Thanksgiving Day in Wooster Ohio, hometown of my race enthusiast boyfriend, Kent. My training? Running across the bridges downtown Cincinnati – – every now and then. I can’t even say that I “run” with my dog, as Max is a 13-year old, chubby dachshund who does more sniffing than walking these days. Not like the elite racing dogs at Oktoberfest Zinzinnati last week. See video: Weiners in Hot Dog’s Race for braggin’ rights

What surprised me that November day?

There was a jolt of pride that accompanied my win (To be clear, I didn’t actually “win,” but I finished. That’s a win, right?) The other thing that happened? I got competitive. With myself and the 10-year-old boy who was ahead of me. I ran harder so I could beat that kid to the finish line. In the end, I got a race shirt, bag of goodies, a shot of Baileys and sent my friend a selfie. #yourturn 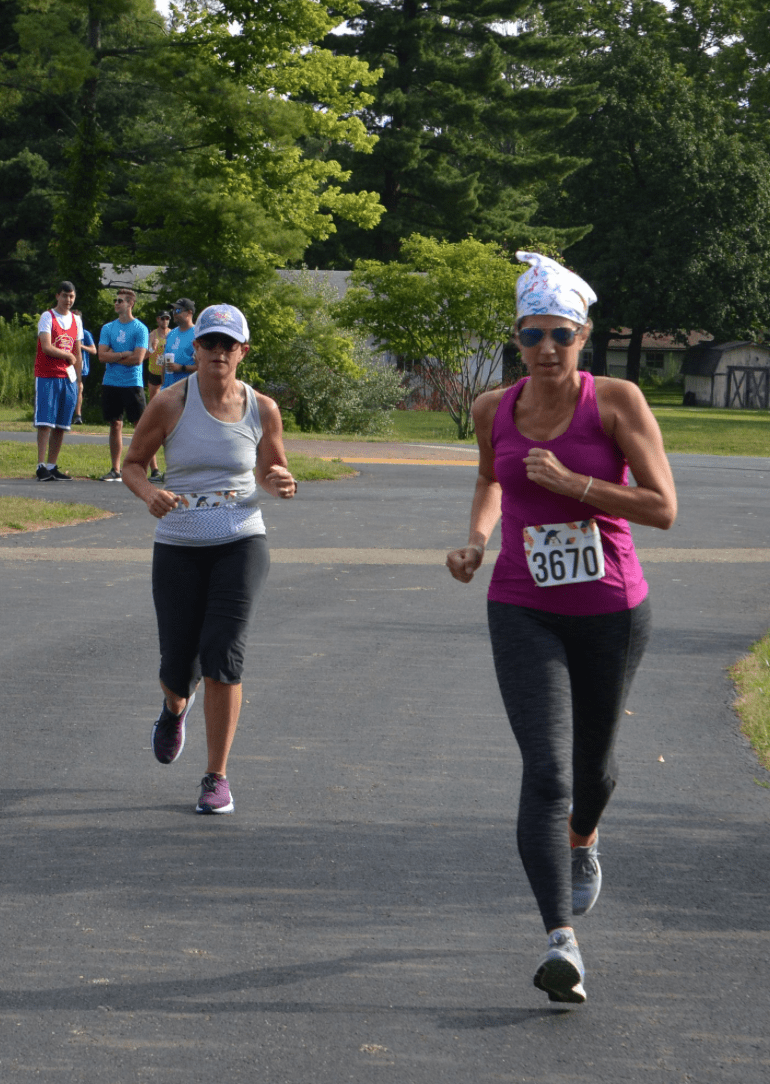 Looking like a pro at Save our Sisters Run 😉

Since then, I’ve been in three 5Ks. For runners and anyone with some level of fitness, a 5K isn’t a big deal. For me, it is. Now, it’s a bit less daunting since doing a few. On a seasonably cool August morning this summer, I ran my third 5K. It was a spirited event in a park in Columbus, Ohio. There were less than 100 people there. Just my speed. As with many races, this was a fundraiser. The cause was cervical cancer awareness and was hosted by friends, (Save our Sisters Race for Cervical Cancer). I surveyed the course. Pretty simple, 3 laps and {boom} I’m done. I was actually looking forward to this one because this was my only opportunity to both work out and clear my head for the upcoming week.

Fans: They make it better

If you’ve ever been to a marathon or major race, you’ll see packs of race day fans along the route. From the ultra marathoner to the 5K weekend warrior – get ready for heaps of positive energy from the sidelines. It’s unavoidable and totally unexpected.

Fans hold fun signs (like, “There’s no ‘I’ in ‘Quit’”), wear crazy costumes, give high-fives, pass out water and cheer you on. The Flying Pig Marathon, has awesome fans. 26.2 miles of them. Last year, I joined the crowd. I made a sign (for Kent) and showed up at the crack of dawn to cheer him on. Next to me was a Blue Grass Band. It was 6AM.

It wasn’t until the Columbus run that I experienced fans. Right there, just around the third bend, was a group of enthusiastic teens holding signs saying: “DON’T STOP BELIEVING!” “NEVER GIVE UP!” “YOU GOT THIS!” They rooted for us as if we were Olympians. It was cute.

Running is an individual sport. It’s an activity that allows you to go as hard and fast as you like or slow and steady. You get in your head, sort stuff out, pray (if that’s your thing), clear your mind, whatever it is you do when you need space to think. At first, having those kids on the sideline was a fun distraction. By the third lap, I was looking forward to seeing them, they made me laugh out loud. Their energy was contagious. Furthermore, they were working really hard and I wanted them to know I appreciated it. 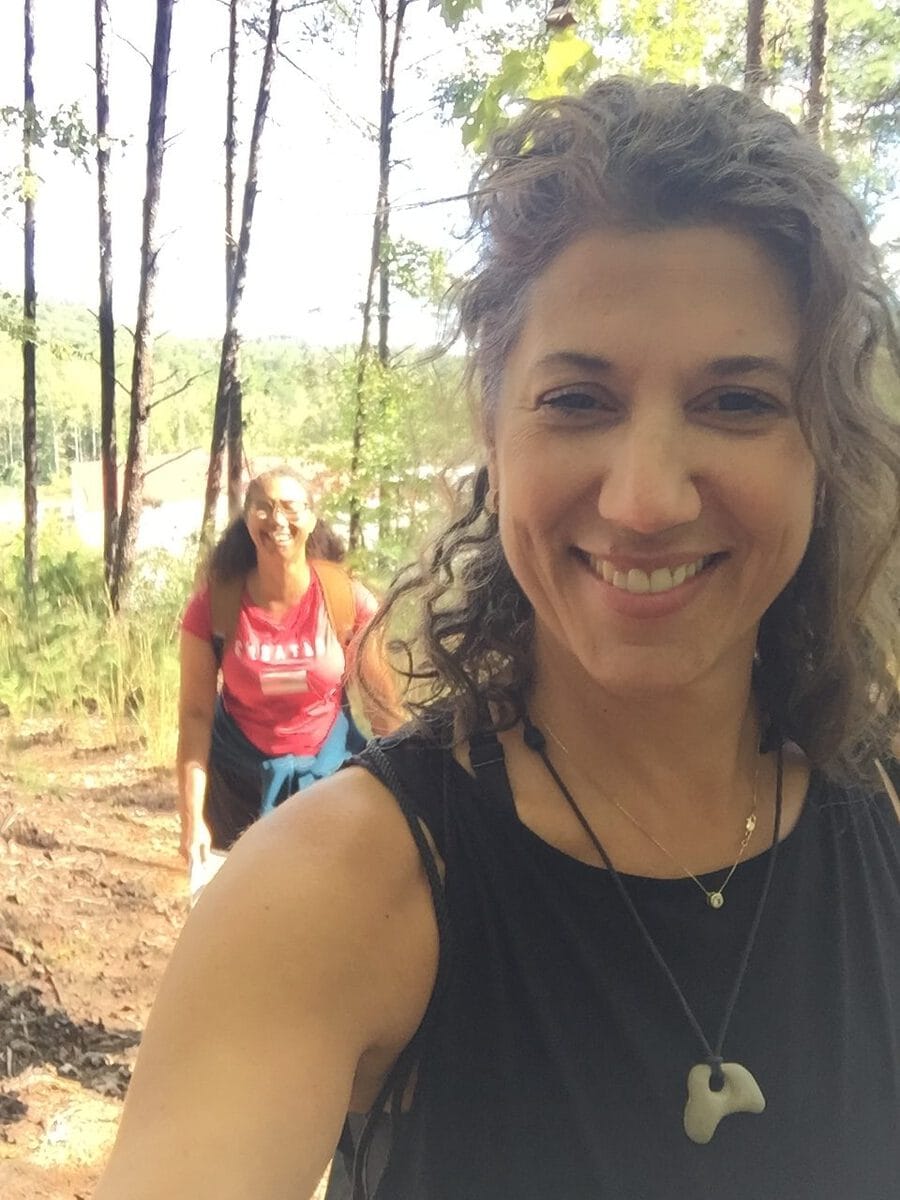 me and bestie in NC

They brought to mind the many co-workers, mentors, friends and family who’ve encouraged me over the years. These are the people saying “You’re doing great!”  “I’ll be right over.” “Let’s just sit here until you are ok.”  “You can do better than that.” They are all around and give in a myriad of ways. I’m lucky to have that bestie mentioned in paragraph one. She is a “show up” kind of gal who inspires me every day.

Others like her are out there. We’re not alone. But we need to take the first step and show-up.

I’m guessing that a very supportive person is coming to mind now. Maybe that person is still in your life, maybe they’ve moved on. Maybe your team is “just around the bend.” You can’t see them, but they are there. If you are having a hard time finding a supportive community, think about what brings you the most joy and seek out like-minded people. Volunteer. Join a club. Meet up. Community centers. Places of worship. A quick google search will give you hundreds of options. There are no excuses, though it may take some time and effort on your part to look. Not a lot. More than half the battle is just showing up where supportive people gather. Don’t be surprised if you find more people in your corner than you think.

Just for today (and every day after this), will you do me a huge favor? Show up for your race and allow others to be there for you? If you have a hard time asking for help, please give people a break when they miss obvious clues or overstep. We are all human. We all need grace. Like these guys: Cheerleaders who mean well.

Whether you are highly motivated, limping along or somewhere in between, seek and accept the support of others.

Show up. Receive it. Return the favor to someone else later.

Over the next several blogs, I’ll share an approach to leadership and life called the Four Fold Way. It is a methodology taught at UC Berkeley’s Executive Coaching Institute. It’s a simple practice that can transform your relationships. The four principles are, (1) Show up and be present, (2) Pay attention to what has heart and meaning, (3) Tell the truth without blame or judgment and (4) Be open to outcomes, not attached to outcomes. (The Four Fold Way by Angeles Arrien)

Need a boost to help you cast vision for your life or work? Let’s talk. I work with people in all facets of their life encouraging them to step up, lead and make a difference.